What’s the most interesting marketing tip you’ve discovered from this post?

Speaking is part of being human. The idea of being able to communicate is essential to our day-to-day life.

If we’re so good at communicating, why is it so hard to write dialogue in a story?

Our latest interviewee stopped by to give some great tips on how to write great dialogue in a story.

Read Evelyn Puerto’s newest novel for yourself. Click here to get your copy of Flight of the Spark.

Writing Dialogue in a Story Isn’t That Tricky

According to Evelyn Puerto (and pretty much every writing blog out there) writing dialogue boils down to one big rule: Make it sound realistic.

You not only communicate every day (unless you’re on a really heavy writing binge), but you hear other people communicating. Dialogue is all around us. Constantly. Sometimes too constantly. The TV blares it. Your favorite novel is full of it. Your family squawks it over dinner.

Inherently, you know how to write dialogue. Sometimes you just have to get out of your own way in order to get it on paper. Luckily, Evelyn was kind enough to give us some quick tips on how to get your dialogue just right.

Evelyn Puerto reads just about anything and writes in multiple genres. Her first book, Beyond the Rapids, won a Reader’s Favorite award. When she married, she inherited three stepdaughters, a pair of step-grandsons, and a psychotic cat. Currently, she writes from northeastern Wisconsin but soon will be heading south for shorter winters.

Flight of the Spark sounds amazing! Tell me a little about the book and how you came to write it. 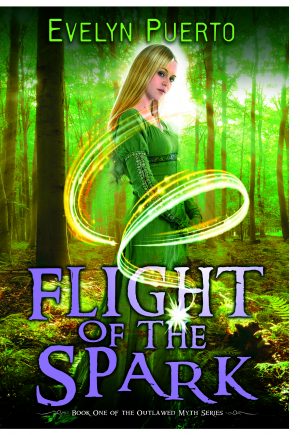 Flight of the Spark is a dystopian fantasy in a medieval setting. Duty, desire, and destiny collide when fifteen-year-old Iskra’s betrayal causes her friend to disappear. Iskra’s quest to discover what happened to her friend entangles her fate with a cryptic, half-forgotten myth and a young man from an outcast group who ensnares her heart.

After I wrote Beyond the Rapids (a true story about one family’s triumph over religious persecution in Communist Ukraine), I started to think I could actually write a novel. Who knew it would take me six years? But it was a switch to go from non-fiction to fiction, and I wanted to take the time to learn to write fiction well.

This is book one of a series, correct? How many are you planning?

This is the first book of the Outlawed Myth series. I’m planning three more, plus a have prequel novella that I hope to publish this spring or summer.

I get quite a few questions about how to plan a book series. How did you go about planning this one? Any tips and tricks for keeping things straight?

First, I figured out the basic story for the four books, how the story got started and how it ended. Over the years, I drafted all the books, three of them through NaNoWriMo. While that was a lot of work, it helped me clarify the main storyline in my mind.

The key for me is not just having the overall storyline, but a story within each novel. I don’t like series that just end on cliffhangers without some major plot resolution. So as I planned the series, I gave each book in the series a complete story arc of its own.

Scrivener has been my best friend in keeping things straight. I have all my world-building, character, and setting notes all in one place, so I can find easily what I called the days of the week or what color people’s eyes are.

Another question I get frequently, and something a lot of authors can improve upon, is dialogue. What’s your number one rule when writing dialogue?

Make it realistic. Early on I submitted a short story to a writing forum, and they told me my dialogue was on the nose. I had to look that up to see what they meant. In other words, my characters were telling each other things they already knew or were painfully obvious.

For example, if someone is explaining to her mother that she’s going to visit her brother, she wouldn’t say to her mother, “As you know, he’s a junior at the University of Kansas studying agriculture. He’s really hoping to own a farm someday.”

Mom knows all that. Dumping backstory into dialogue is a great way to make it sound unnatural and forced. And it’s dialogue that lets the writer tell the reader information, but it doesn’t serve the needs of the character.

Also, people don’t always say what they mean, or what they are thinking. Or they evade the main issue under discussion. These are all things to think about when writing realistic dialogue.

“
“People don’t always say what they mean, or what they are thinking. Or they evade the main issue under discussion. These are all things to think about when writing realistic dialogue.” —Evelyn Puerto
Tweet this
Tweet

When I’m writing dialogue in a story, sometimes I act out the scenes. Do you do anything similar?

I often say it out loud, to hear if it sounds realistic.

You touched on this a moment ago, but I’d like to dive in a little further. Sometimes I see an author try to use dialogue in a story as an info dump and the character goes on and on for pages explaining the world or giving detailed backstory. Do you have any tricks to avoid this or how to tell what to cut when editing?

In Flight of the Spark, I used a device to give some backstory through dialogue. The main character was in that world’s equivalent of school, and they had a history lesson. Different members of the class shared different facts. In between, the teacher made comments, and the main character gave the reader her own internal critical commentary.

Nobody gave a lecture, the reader got a little background, and a glimpse into the main character’s opinion of the world she lived in.

The important thing is to decide if the reader needs to know that information right at that moment. If not, cut it out and maybe share it later.

Spice It Up with Action

Action beats are a great way to spice up a conversation. How frequently do you write in action beats? How do you keep them fresh and avoid overused action beats?

I try to use action beats as much as I can, partly to avoid dialogue tags.

This is when I start acting out my dialogue. As I say the words, I pay attention to what I’m starting to do. Am I sighing? Clenching my fist? Waving my hand in the air? This is one way I can think of new action beats.

Another way to avoid overusing them is to think about the direction the conversation is going. If the people involved are getting more angry the longer they talk, then the action beats should intensify along with their emotions. So the first beat might be a clenched jaw, the second a clenched fist, the third throwing a glass against the wall.

To keep mixing up the beats, I rely heavily on The Emotion Thesaurus. This is a great resource that suggests many ways to show a particular emotion, and I’ve found it to be priceless for coming up with a variety of beats.

When you’re reading, do you have any dialogue pet peeves or “no-nos” you see other writers doing?

One big pet peeve has to do with dialogue tags. Some writers like to use all kinds of words, like shouted, yelled, orated, guessed, stated, the list just goes on. They are distracting, and it should be obvious from the dialogue or the action surrounding the conversation if someone is yelling or not. “Said” is all you need, with the occasional “asked.”

What’s the worst thing about writing for you? How do you push past that?

Probably the fear that no one will like my work. It’s that fear that fuels my procrastination. Yes, that’s part of why it took me six years to produce my novel.

Getting feedback was extremely helpful, because it told me that at least some people enjoyed my work. That gave me the will to overcome the fear and to keep writing.

Any advice to give to novice writers out there?

Stick with it, and get your work out there. Now that Flight of the Spark has been published, I’m so much more motivated to finish the rest of the series.

When in doubt, act it out!

There’s a simple truth to dialogue in a story: It has to sound natural coming out of someone’s mouth.

The best way to make sure your dialogue sounds natural? Act it out!

You’ll feel a bit silly, perhaps, but feeling silly is much better than a reader rolling their eyes at your dialogue. Or worse, putting your book down altogether!

Get a buddy if you want and playact it like you’re table reading for a TV show. Or just go all out and act it out alone in your writing space, looking like a crazy person. (This is my preference, by the way.)

Thanks to Evelyn for agreeing to give some dialogue tips! Here’s where you can find Flight of the Spark, and don’t forget to check out Evelyn’s website!

Do you read your dialogue aloud? Let me know in the comments!

You guessed it: For today’s practice, you’re going to write a very dialogue-heavy scene. Set a timer for fifteen minutes and write. Write dialogue only. You may add action beats and dialogue tags. Otherwise, everything should be spoken.

Need a prompt to get you started? Write an interaction between a teacher and a student.

After your fifteen minutes are over, clear your throat and act out the scene! Do not skip this part!

Share your scene in the comments so we can all check it out. I also want to hear how the read-aloud went. Don’t forget to read and comment on your fellow writers’ work!

The post Evelyn Puerto on How to Write Great Dialogue in a Story appeared first on The Write Practice.