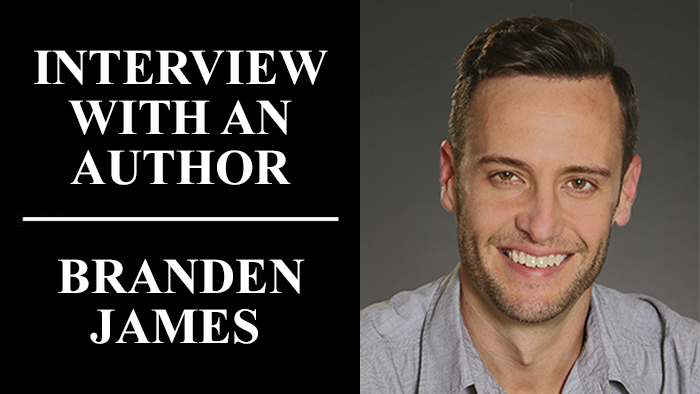 In our Interview with an Author series, Writer’s Relief asks professional writers to share their tried-and-true secrets for publishing success.

When Branden James became a finalist on season eight of America’s Got Talent, he used his time in the spotlight for more than just singing—he also shared details of his personal life, including coming out to his religious family and the resulting broken ties.

The overwhelming positive response to his personal story inspired Branden to continue being open and authentic. After blogging about his life experiences, he decided to write a memoir. His book, Lyrics of My Life, has just been published and is available now at his website.

In his memoir, Branden shares what it’s like to struggle with depression, contract HIV, and be a victim of sexual assault—all while maintaining his Christian faith.

BONUS: Leave a comment by September 17, 2020, and you’ll be entered to win a copy of Branden’s book, Lyrics of My Life! U.S. residents only.

Will you tell us more about your book, Lyrics of My Life?

The book came about by complete accident, really. I was told by my social media manager at the time that I should write more blog posts to improve my SEO score for the online presence of the musical duo I play in called Branden & James. I was writing them regularly for quite a while. The blog posts began to resonate with people, and I was approached by a couple of literary agents. The rest is history! I never intended to write a book. But the story I told when I was on America’s Got Talent was quite impactful to many, and I realized the power in sharing my story.

Lyrics of My Life is a memoir that chronicles what my life was like growing up in the ’80s and ’90s as a closeted gay male Christian in an ultraconservative, hetero-centric family. I had no one to turn to, nor anyone I trusted to talk about my feelings, so I turned to music. My piano was a place of solace; then came the singing, and my confidence slowly built up from there. Music shaped me into a complete person with an identity and self-worth. I understood that my talents were worth something; therefore, I was worth something too.

So many kids reached out to me after AGT explaining that they also had problems in their homes. I understood that it was more common than I thought, but still often not talked about. I wanted to help these young people, and this opportunity presented itself. The book is a road map of sorts, for others who are in similar situations. My story is one of triumph over trial; most people don’t have it that easy. After many years, I was able to reconcile that it is more important to love my family and have a relationship with them than it is to be angry and bitter toward them for the things they did. My parents were nineteen years old when they were married. They were just kids raising kids, really. Times were different, even in progressive Southern California. People didn’t openly speak about homosexuality outside of the TV show Ellen and a few other Hollywood outlets.

I made some bad choices along the way: I let someone take advantage of me sexually, I got caught up in the party scene, and eventually I contracted HIV. I felt like a statistic, like a failure, after that happened. It was like going back into the closet again. I feared my life would end early, and lived a hard and fast life for a while, running away from the reality that I might someday die from complications related to HIV/AIDS. It wasn’t until I was on AGT that I was able to reconcile things with my family. It’s as if seeing me through the TV screen filtered out their usual judgment of what they referred to as my “lifestyle choices.” I realized then that my parents were genuinely proud of me and never stopped loving me, so why would I stop loving them?

Music continued to be my savior and my place of solace; it was at times my only friend. It took me eleven years before I was able to tell my parents about my HIV status. After I did it, I woke up one day and realized I didn’t hate myself anymore: I was actually pretty damned proud of who I was. My relationship with the church was rocky to say the least: it still is. But I also realized while writing the book that God doesn’t discriminate and never stopped loving me.

Today, I’m happy to know that I’ve set myself free by being authentic and transparent about who I am. The lyrics of our lives are written along the way through the hardships, joys, pains, and trials we all experience. It’s up to us as individuals to find a way to love ourselves enough to forgive ourselves for the things we might hold ourselves to blame. I hope that the readers will see this powerful lesson and always remember to fight hard for the things they believe in—and above all, treat others with compassion and kindness.

What role did social media play in staying connected to readers, building an audience, and getting noticed by the publishing industry?

I’ve always had a social media presence since I was on AGT in 2013. It morphed from my work as a solo artist to a full devotion to the work of my duo with my husband, Australian cellist James Clark. It’s a tricky game, but I think we’re finally seeing the light at the end of the tunnel and we’re engaging more people, both musically and relationally. We’ll see what happens when people read my story and the reviews start coming in.

How did you move from your music career to publishing a book?

Although my longtime friend and social media manager, Justin Baker, says, “Writing a book was always the objective,” I never saw it that way, but sometimes you need other people’s eyes to really understand things about yourself that you cannot see on your own. In 2014, I appeared in the Cherry Blossom Festival in Washington, D.C. After my performance, a perfect stranger came up to me who knew who I was and said, “You are an agent of change. Don’t forget that your story means something to many people.” I started a conversation on AGT, and realized then that someday I would find a way to finish it. I turned to songwriting, but it wasn’t the best way for me to express my feelings and the story I wanted to tell.

The blogging was a much more comfortable outlet for me, so I just ran with it and decided I would ignore whatever I perceived as shortcomings in my own life and tell everyone about how my failures are actually what have helped me.

What has been the biggest stumbling block or frustration for you so far, and how did you overcome it?

I had writer’s block for about a month during the process of getting this all down. That was tough. The hardest thing was so vividly reliving some tense incidents throughout those tumultuous years: feeling betrayed by my family, being molested, getting thrown out of the car by my father, my HIV diagnosis, and the process of shedding that old layer of skin that was hanging on to me, but wasn’t the essence of who I am anymore. I remember being angry when I wrote sections of the book. I cried a lot. I called my mom and said some things that weren’t necessarily kind. I was in a funk for about a month, and it was over the period of my fortieth birthday. God bless my husband, James, for helping me through it. It was intense at times.

What patterns, habits, or motivational techniques have best served you on your journey to success?

I wouldn’t say I have any patterns or habits. I’m an artist. I’m driven by creativity and by whatever is happening in the moment. My lack of self-esteem, I can compare to the struggles of an alcoholic. It is there every day, and I have to remind myself that I’m good enough, I’m brave enough, and people will find value in the things I have to say or sing about. Those skeletons will always be in my closet—I’m committed to dealing with them on a daily basis in order to simply survive. I take an antidepressant, which has helped me stay in a positive mindset. I am predisposed to depression, and that’s okay. My motivational techniques lie mostly in choosing to ignore that voice of self-doubt in my head and reminding myself that I’m happy, healthy, and worthy of any aspiration I may have. Medicines have changed: I no longer worry that I’m going to die from HIV/AIDS complications. I have a “new lease on life” as Jonathan Larson wrote in the score of Rent, the musical.

In one sentence, what’s your best piece of advice for getting a book published?

Write from your heart, be authentic, be kind and compassionate, tell your story with pride—and then throw the cards up in the air and see where they land. That’s what I did.

About Lyrics of My Life 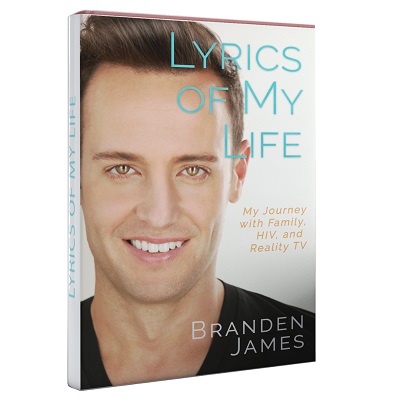 Lyrics of My Life is authentically Branden: a memoir highlighting the conflicts of growing up gay in a world that looked upon his true self and beliefs as an impractical, sinful way of life. Branden spares no details about his unstable life as a young adult, estrangement from his close-knit family, and, despite it all, his unbreakable will to overcome adversity. In a quest for his own personal freedom, Branden finds reconciliation with his family, rediscovers his faith, and realizes that affliction and hardship are not what define us as human beings.

Praise for Lyrics of My Life

“Branden’s bravery and willingness to share his most personal experiences are going to help so many people struggling with similar issues. This book is very necessary for the times we are in to help others see the light and have hope.” — Pia Toscano, American Idol finalist and touring recording artist with Jennifer Lopez, David Foster, and Andrea Bocelli

“Branden’s book is needed for these times. Being true to our soul and living with courage are required for survival, and his moving story will certainly inspire others, as it has deeply inspired me.” — Michael Feinstein, Grammy and Emmy-nominated singer, pianist, and music revivalist

BONUS: Leave a comment by September 17, 2020, and you’ll be entered to win a copy of Branden’s book, Lyrics of My Life! U.S. residents only.

For more information on Branden James, please visit his website.