How will you implement the knowledge from this post?

Adding an animal to your story can reveal a lot about the humans who inhabit your world. Whether a beloved pet or a rogue turkey, adding an animal encounter to a scene is surprisingly humanizing. 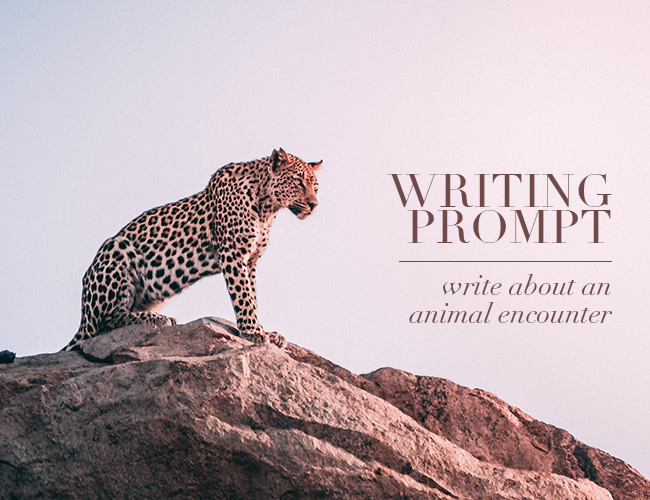 First off, let me say that today’s post is not about dead dog stories. Old Yeller and Where the Red Fern Grows are still etched as traumatic episodes in my childhood story history. If you love those stories and want to tell them, go for it. The goal of this writing prompt is to have fun and reveal character. See if you can write an animal encounter today.

When I was a kid, my family had dogs, cats, bunnies, gerbils and hamsters, parakeets, and other birds. My grandparents had an evil duck (no seriously, his name was Beelzebub) along with their assortment of dogs and stray cats, a parrot, and anything else that wandered into their yard.

As a result, many of our family stories involve animals. My Uncle Rod had a 4H cow he named Beef Jerky. There was the time I almost accidentally fed my best friend Heidi to my grandparents’ Great Dane Tiger Lily. Those stories have shaped who we are and how we view ourselves because an animal complicated or enhanced our lives. Here are some of the benefits of inviting an animal into your story.

When I was ten, I invited my best friend Heidi to meet the Great Dane Tiger Lily. Heidi did not like dogs. Tiger Lily did not like little girls she didn’t know.

After I led my friend into Tiger Lily’s yard, Heidi was only saved by some quick-thinking by one of my uncles who threw Heidi over the fence and out of reach. (Yes, she eventually forgave me.)

Everything in the encounter created conflict. My friend’s aversion, the dog’s unpredictability, my own stupidity. Adding an animal to a scene is a great way to create conflict.

“
Adding an animal to a scene is a great source for conflict. What will the animal do, and how will your character respond?
Tweet this
Tweet

Animals are great for stories because they can have huge personalities of their own or they can draw out the personality of those they interact with. Think about your favorite stories with animals—from Curious George to Eddie the Dog from the sitcom Frasier. Animals can reflect their owners or they can be a contradiction that amplifies character.

An encounter with an animal in the wild can produce a range of responses from terror (hello, bear or mountain lion) to overreaction (hello, small skunk!). Think about what kind of animal would best fit with your character and scene to show off a personality.

Blake Snyder’s screenwriting book Save the Cat is named after a scene beat designed to make the audience love a character. Snyder suggests that every story needs to have a moment of vulnerability for the character, whether it’s created through saving a stranded kitten or sticking up for an underdog.

A character who seems to be a terrible person might be humanized by caring (even if reluctantly) for her neighbor’s cat while he’s in the hospital.

Find a way to set up an animal encounter that leaves the character vulnerable and the audience will swoon.

Animals shift the tone of a scene or story, adding an element of unpredictability. Whether an animal becomes your character’s loyal companion, viciously attacks, or simply wanders through a scene, adding an animal is a great way to shake things up. When’s the last time you added an animal to your stories?

What are your favorite examples of animal encounters that enhanced a story or revealed character? Let us know in the comments.

For your writing prompt today, write a scene with an animal encounter. Will the encounter end well or poorly? Will your character like the animal or not? What conflict will the animal spark?

Choose any animal you like, or pick one of these to get started:

Write for fifteen minutes. When you’re done, share your writing in the comments, and be sure to leave feedback for your fellow writers!

The post Writing Prompt: Write About an Animal Encounter appeared first on The Write Practice.