How will you utilize the knowledge from this post? 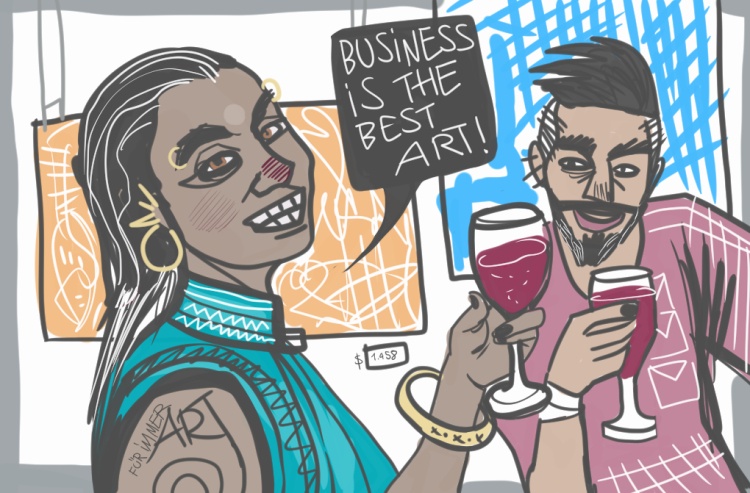 Last week I attended a secret Christmas artist party on the distant outskirts of Berlin. The invite-only event was located in a garden colony, inside a former workshop for heavy machinery. The event was a Who’s Who of Berlin’s fine artists.

I went to the event for three reasons:

This was a great opportunity to do some networking at a social event — but how to remain cool and appropriate while doing it? I’ll let you know how it went for me and share my lessons.

By the way, this post features a dynamite-equipped Santa Claus so do read on…

A sample is worth a hundred sentences

Guests at social events, even art parties, are not interested in hour-long conversations. They want to talk to many other people so you want to hook them ASAP. And samples are the grappling hook snapping instant attention.

In my case, being a cartoonist, I always flip open my Instagram feed which acts as my art portfolio.

So in the main hall of the art party, I showed a real estate guy all my artworks tagged with Berlin keywords while explaining the thoughts behind each creation.

I’ve also seen a sculptor carrying an art catalog with his recent work. Every time he showed his cartoonish horse and people figures, he pulled a small crowd. He would have never enticed folks by just talking about his creations.

But you don’t have to be a visual creator to hook folks at a social networking event.

Two years ago, I attended a freelance networking event in Berlin.

There, a translator carried a small flipbook which featured bite-sized English and German samples of his work. And since he specialized in translating works dealing with sustainability and social enterprise, his flipbook and logo were dark green, printed on recycled paper.

What a great idea to hook folks at an event while staying true to your brand!

You probably have witnessed it countless times:

Two strangers at a social networking event try to small talk. To break the awkward silence, they unleash the dreaded “so what do you do” question.

You want to engage the other person by triggering their expertise and passion.

When I learned about the real estate guy constructing private flats in Berlin, I didn’t ask him any generic follow-up questions.

Instead, I wanted to know what he thought of the government’s new rent regulation laws which dramatically impacts how real estate works in the capital.

Within seconds, the guy ranted with passion, calling out specific politicians, explaining how this or that regulation was blowing up prices per square meter and complicated his business.

After his rant was over and rapport was established, he focused 98% on me.

Listen, it’s not the BEST idea to make your conversation partner rant. But a specific question aimed at their passion and expertise is so much better than lame questions they probably answer a dozen times at the same event.

You want to elevate them from a low-energy to a high-energy state so engagement can happen.

Bridging gaps when interests are opposite

During the initial phase of the conversation with the real estate guy, I realized he carried no interest in a cartoon or comic art, which was my flaming passion.

After having learned about his passion for urban planning, Berlin and its history, I knew I could reframe my art, making it more tasty to him.

I told him about my style which I dubbed Urban Cartoon Art, and how my characters were manifestations of the city:

All these creations were inspired by Berlin’s city vibes, which piqued the real estate guy’s interest. I also told him about my last exhibition inside a hall that used to be a military horse ban during the German Empire era.

Soon, the real estate guy started asking me specific questions about style and ideas. After fifteen or twenty minutes of passionate talking, he even ended up buying a limited art print he saw on my Instagram feed.

Small-talk at social and networking events can be a treasure hunt. By showing samples of your work, asking specific, expertise-related questions and linking them to your offer, you can make great connections and deals happen.

Mars Dorian is an illustrating designer and storyteller. He crafts words and pictures that help clients stand out online and reach their customers. You can find his homebase at www.marsdorian.com and connect with him on Twitter @marsdorian.

The post How to be business cool while networking at a social event appeared first on Schaefer Marketing Solutions: We Help Businesses {grow}.