How will you utilize the advice from this post?

When I think about storytelling at its most basic, I think about our earliest ancestors, sitting around a campfire, sharing stories about their lives, the adventures they’ve been part of, and the history of their people.

Narrative devices are about how you tell the story, and if you’re a writer, the method and perspective of your storytelling is something you must consider.

In this article, we’re going to talk about narrative devices, what they are, the different types found in the best books, plays, films, and serials, and how to use them to tell a powerful story. 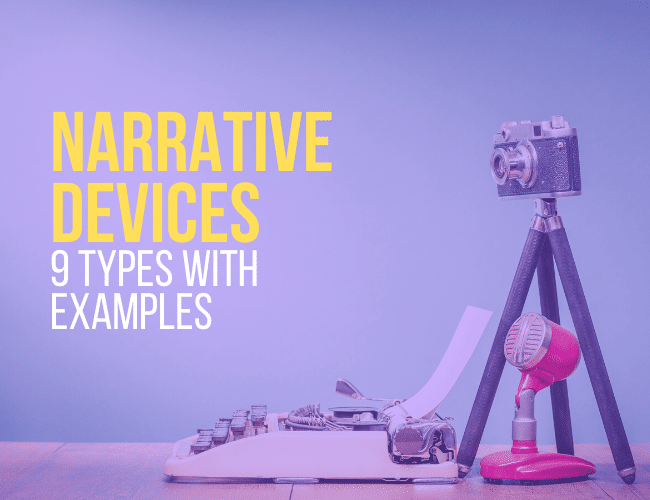 First, let’s start by defining what a narrative device is.

Before we get into the examples, let me say this: if you’re interested in experimental writing, the cutting edge in fiction and the kind of work that can win you literary awards, narrative device has consistently been the realm in which to play.

Examples of award winning writers who have creatively used narrative device to win them fame and fortune include Stephen Chbosky, Joseph Conrad, Margaret Atwood, William Shakespeare, and even Geoffery Chaucer.

How will you tell your story? Find the list of narrative devices below:

In a chronological narrative, the events follow chronological and sequential order. Flashbacks, memories, and dreams may also be used to give information and show events to the reader at the right moment, but the narrative soon returns to chronological order of events.

Chronological narrative far the most common narrative device, to the extent that it is the default of ninety-nine percent of novels, films, and memoirs.

Real time narrative is a version of chronological narrative in which each hour of the narrative corresponds to one hour of events within the story. This narrative device is only available to film (or theater). The primary example of this device is the television series 24.

The narrator or specific characters (rarely all characters) can address the reader or viewer directly, sometimes referring to them as “dear reader.”

While first found in theater, this device is also used in other forms, including novels, memoir, and film.

In my own writing, I used this device in my memoir Crowdsourcing Paris. Personally, I find addressing the reader directly lends a sense of intimacy and authenticity to the narrative.

This device may be combined or even enhanced by other devices.

Taking the idea of breaking the fourth wall further, the epistolic narrative device (epistolic, as in a letter) or diary narrative device allows the narrator to address the reader directly through a letter or diary format. This is one of the most popular narrative devices in literature, and it has been used in stories ranging from Gillian Flynn’s Gone Girl to Mary Shelley’s Frankenstein to Stephen Chbosky’s Perks of Being a Wallflower to Salman Rushdie’s Midnight’s Children.

Another version of this is an oral history narrative device, in which an oral telling of the story replaces the letter or diary. William Faulkner used this method, notably in Absalom Absalom and The Sound and the Fury. Joseph Conrad also used it in Heart of Darkness, in which a seaman returning home from a voyage relates a story to his crew mates of an adventure gone wrong.

Originating in the reality TV format, the mockumentary narrative device assumes that there is a documentary crew following the characters as they go through the events of their (fictional) lives. This allows characters within the narrative to address the viewer directly through interspersed interviews and occasional moments where the characters look directly into the camera.

The Office is a good example of this device, as well as Waiting for Guffman and This Is Spinal Tap.

Like the epistolic narrative device but for film, this allows the characters to share their inner monologue directly with the audience during the events of the story, something that was not previously possible in film.

Later iterations of this style have removed the conceit of the documentary crew altogether, even as they keep the interviews, like later season of The Office and the show Modern Family.

Story Within a Story, also known as a Framing Story

A framing story is a narrative device in which there is another story within the story that is somehow related. This is device has been used by some of the best writers in history. William Shakespeare was especially fond of it, and included it in several of his plays, including Hamlet, A Midsummer Night’s Dream, and Taming of the Shrew, among others.

Stream of consciousness is a narrative device and literary style in which the narrative is within the first person narrator’s consciousness. The reader is placed inside the thoughts and perceptions of the main character

Edgar Allen Poe flirted with this style as early as 1843, but it wasn’t until the modernist authors of the early 1900s that the style came into full form. James Joyce, Virginia Woolf, and Marcel Proust all helped develop this style, and later, more popular authors like Ernest Hemingway made use of it.

Taking this style further, second person narratives like Jay McInerny’s Bright Lights, Big City and Audrey Chin’s As the Heartbones Break put the reader directly into the character’s persona, addressing the character as “you,” as if all of the character’s thoughts and perceptions are the readers.

Personally, I used stream of consciousness briefly in my memoir Crowdsourcing Paris in Chapter 10, in which I streamed through two months of writing in cafés.

This device can turn off some readers, something I learned from experience. Some readers loved chapter 10 of Crowdsourcing Paris. They said it was their favorite chapter, the moment that the book flowed the best. Others hated it, saying they found it confusing and hard to follow. For me, though, writing in stream of consciousness has always been thrilling, and one of the easiest ways to get into flow state.

All that’s to say, experiment with stream of consciousness, but be conscious about its affect on your readers.

Which Narrative Devices Will You Use to Write Your Book or Screenplay?

All novels use a narrative device, generally chronological narrative. But just because that is the most popular device doesn’t mean you have to use it to write your screenplay or novel.

What device would fit your story best? If you begin with that question, you should be prepared to make the best decision.

Which narrative device do you like best? Which will you use, or have you used, in your writing? Let us know in the comments.

An old man or woman tells the story of a mysterious adventure he or she had when he or she was young.

Choose one of the narrative devices above and write your story for fifteen minutes. When your time is up, post your practice in the comments section to get feedback. Then, make sure to give feedback to three other writers too.