How will you use the strategy from this post?

As writers, we are artists. We create through inspiration—a spark brought to fruition through discipline, hard work, and practice. And we draw inspiration from everywhere around us. 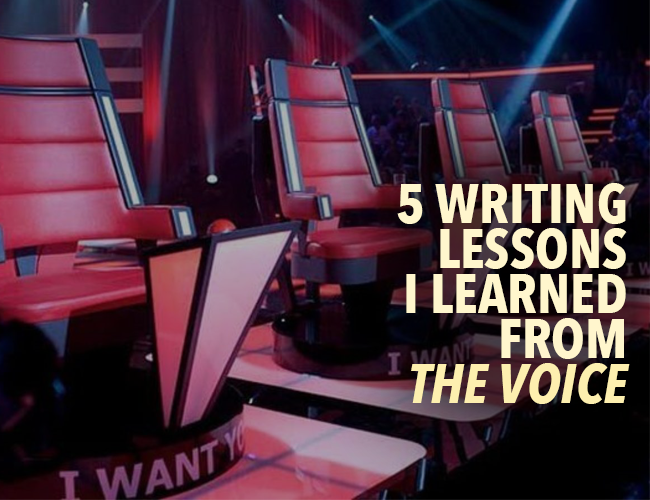 I had some inspiring moments this week as a result of following up on a suggestion from my mentor, Dean Wesley Smith. He told me to go watch a few episodes of blind auditions from the TV show The Voice and see what I could pull from it in terms of lessons for my writing.

I struck a gold mine in the Season 18 Blind Auditions, Part 2, and I’m sharing it with you.

What Is The Voice?

In case you’re not familiar with it, let me explain the premise of the show. Essentially, it’s a competition between four teams, and the blind audition is like when the team captains are picking their teams. It’s called a blind audition because the coaches start out by sitting in chairs that face away from the stage. They can’t see the performers—only hear them.

If what they hear catches their interest, they hit a button that turns their chair toward the stage. This signals that they want this performer on their team. If more than one coach turns their chair, they are in competition for that performer and must pitch their coaching skills. The performer chooses their coach and the teams are formed.

Now and then, someone will sing and no chairs will turn. Sadly, that person takes their ball and goes home. They didn’t make the cut.

5 Writing Lessons From The Voice

It’s fun to watch, with a variety of great music and vocal delights. Here are a few nuggets we can apply to writing that I got from watching the show.

1. The value of real-life experience

After one stellar performance, Nick Jonas said to the singer: “I’m excited to see what inspires you because I feel like you’re the kind of vocalist that real life is going to have a major impact on how you perform on stage.”

Our unique experiences, and the way we react to them, are what set us apart and make us individuals. They give value to what we can offer others and expand our range of expression.

I remember a conversation I once had with a musician friend, a violinist who hit her stride late in life. She told me she used to mourn the fact that she delayed her development to focus on other concerns. But as she came to understand how life events had shaped her, giving her depth and maturity she could have gained no other way, she grew to appreciate how that enriched her playing.

As writers, our real-life experiences do the same, providing a larger emotional palette from which we can draw to create our stories.

The Voice shares highlights and human interest moments about the performers. I listened to one girl tell how she started singing at six years old and her father became her biggest supporter. He set himself up as her sound technician and they traveled, finding gigs. She said, “We didn’t know what we were doing, but we figured it out as we went.”

I don’t know what your writer’s road has been like, but when I took my first steps, I didn’t know what I was doing either. I figured it out as I went along, learning new skills, adding knowledge and contacts, expanding my toolbox. I’m committed to continuing in the same way.

I still have a lot to learn and a long way to go. We all do.

3. It’s all about the emotion

Here are some coaches’ comments I noted down as I watched the show.

“You carry all the emotion that storytellers need.”

“We want to be moved. That’s the point of being an artist.”

“You hit me in an emotional spot.”

It’s the same with writing. Readers read to feel something, to be stirred in some way. As writers, learning how to create those emotional moments is something worthy of our time and effort.

4. More than just an ugly rock

One of the performers shared how she was a rock collector. She laughed about how, when she told people she was going to a rock show, they thought she meant a concert, but really she was just going to look at rocks.

She talked about her favorite kind of rock—a geode. On the outside, it looks like just an ugly rock. But if you crack it open, it’s full of beautiful crystals on the inside.

Sometimes, our books can be like that. They are filled with wonderful, exciting, even life-changing material, but they have to be cracked open before anyone can benefit from all the beauty. That’s why covers, sales copy, and opening paragraphs are so vital. They are what gets a reader to crack open the book.

5. Rejection is not failure

Every singer that appeared on the episode was remarkably talented and put on a great performance. But not all of them got a chair turn. In those instances, the coaches just didn’t quite hear what they were looking for.

When we send our work to an editor and it gets turned down, it’s kind of like that. And a rejection doesn’t mean our story isn’t good. It just means it didn’t work, at that time, for that particular editor. Another quote from the show:

“As an artist, you get so many doors slammed in your face. You should never, ever quit.”

Every writer collects a lot of rejection slips. It’s part of the journey and we can’t let it stop us. Nick Jonas also said this:

“Through success, failure, and everything in between, stay true to your art.”

Failure is a necessary ingredient in the recipe for success.

“
Your writing won’t connect with every reader or every editor. That’s okay. Rejection is part of the writing process. Keep writing!
Tweet this
Tweet

Stay tuned for another important lesson

There’s another huge and inspiring lesson I got out of watching The Voice. It’s what my mentor sent me there to find, but it’s too big to tack on the end of this article. I’ll save it for another time so I can give it the attention it deserves.

I think it’s amazing how much marvelous inspiration I gleaned from a single episode of a television show. But it’s all around us, everywhere, all the time. Like cracking open a geode, we can find value and beauty where we look for it.

How about you? Have you ever watched The Voice? What’s your favorite source for inspiration? Tell us about it in the comments.

Let’s go on The Voice. Drawing inspiration from what you learned in the article, write a scene where your character auditions on The Voice.

What song does he or she perform? What emotions course through her? How does it go? Do the coaches turn their chairs? Can you sprinkle in the bits of backstory that make the show such a success?

Write for fifteen minutes. When you are finished, post your work in the comments and don’t forget to provide feedback for your fellow writers!

The post 5 Writing Lessons I Learned From The Voice appeared first on The Write Practice.