“The article should be 800 words…maximum.”

I can’t count the number of times an editor has assigned me a word count for a piece. In the world of writing, word count matters more than we might think. Many publications determine how much to pay for freelance writing jobs based on article length.

How to see word count in Google Docs

When it comes to word count, there are three types of writers: Those who look at the word count after completing a draft, those who prefer to check in every once in a while and those who want to see the word count throughout the entire process.

If you fall into either of the first two categories, here are two strategies for viewing word count in Google Docs. (If you’re in the third group, don’t worry, there’s a method for you, too!)

1. In the upper left corner of Google Docs, click on Tools and scroll down to Word count. A box will pop up that displays the number of pages, words, characters and characters excluding spaces in the Google Doc. Take a look and press OK when you’re ready to hide the box. 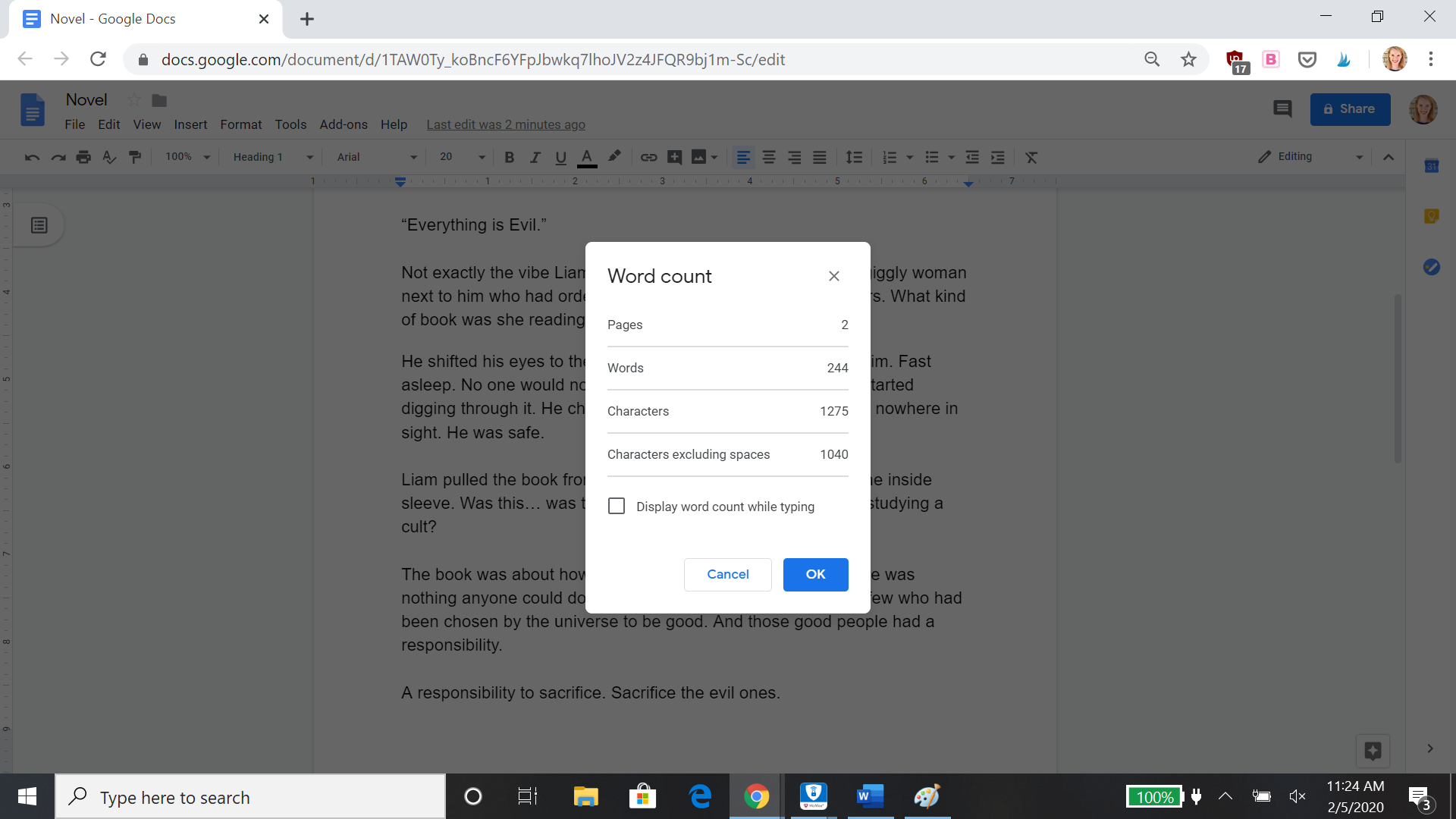 2. There’s a second way to check your word count in Google Docs: use the shortcut! Just hit Ctrl+Shift+C for the box to appear.

Do you get the hunch that chapter three of your novel is running a bit long? There’s a way to check word count in Google Docs without copying and pasting the chapter’s text into a separate document.

Highlight the relevant text, then either select Word count under Tools or use the Ctrl+Shift+C shortcut for the box to pop up. This time, the box will display how many pages, words, characters and characters excluding spaces are in this chunk of text with respect to the total number in the Google Doc.

How to view word count in Google Docs as you type

This strategy is for the third category of writers. Let’s say an editor instructs you to keep an article under 1,200 words. You don’t want to finish a draft only to discover it’s 1,800 words, then make heavy edits before you can submit the piece.

Just keep track as you go!

Either click on Word count or use the shortcut to bring up that little box. Then select Display word count while typing. A small rectangle pops up in the lower left corner of the Google Doc that displays the word count. Click the rectangle’s arrow to see the number of pages, characters and characters excluding spaces. Is the rectangle becoming annoying? Click that arrow and select Hide word count to get it out of your hair. 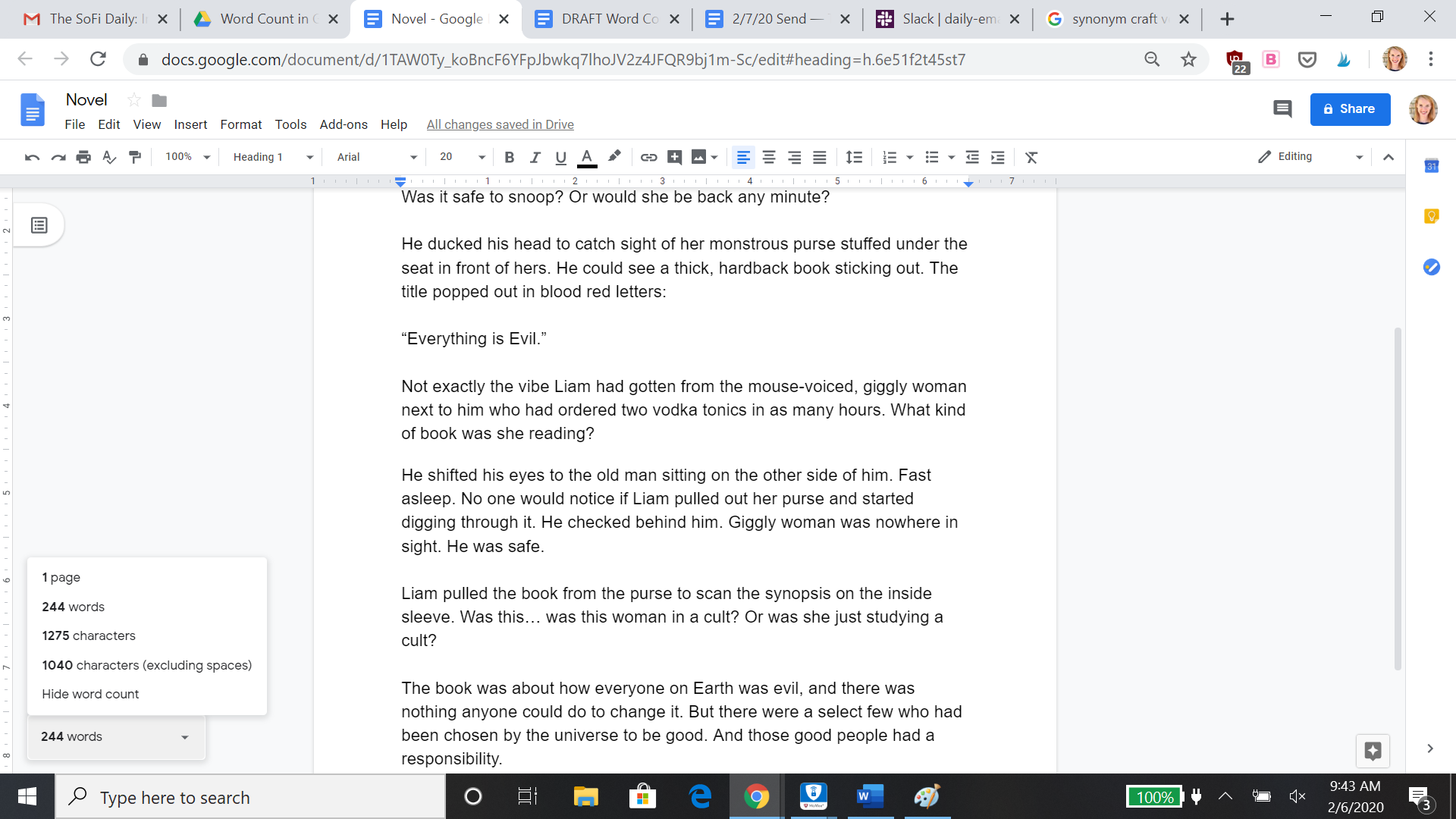 Once your document exceeds 3,676 words, the rectangle no longer shows the number of words. (Why that number? I have no idea.) It will just say View word count, and you can click on the rectangle to see the details.

What is not included in the word count?

Be aware that Google Docs does not include certain things in its word count. It doesn’t count anything in the header, footer or footnotes, even if you highlight the words in those sections and select Word count.

Google Docs also doesn’t count symbols, such as # or $, in its word count. It does count them as characters, though.

It does include em-dashes, which look like — this. (Curious about how to type an em dash? It stumps a lot of writers, but we’ve got a simple guide.) Keep in mind, it only counts an em-dash as a word if there are spaces on either side of it. If you type it like—this, Google Docs doesn’t count the em-dash.

For example, I count 63 words in the above paragraph when I count manually, because I take symbols into consideration. But when I highlight the text and count using Google Docs, the word count appears as 60, because Google Docs didn’t count either of the symbols or the em-dash without spaces.

Counting words can be a little like losing weight. Some people prefer to step on the scales constantly, others like to check in every once in a while, and some just do a final weigh-in when they’ve completed their diet. Whichever method works for your writing style, there’s a way to check word count in Google Docs.

The post How to See Your Word Count in Google Docs As You’re Writing appeared first on The Write Life.