Wait a second. Did you just hear that?

There it is. You heard it, too. Don’t try to tell me you didn’t. That was the sound of a semicolon in the throes of a self-esteem battle.  Poor semicolon, the most misunderstood punctuation mark.

If you’re not sure how to use semicolons in your writing, you’re in the write place (oops, sorry, bad habit). Read on for: 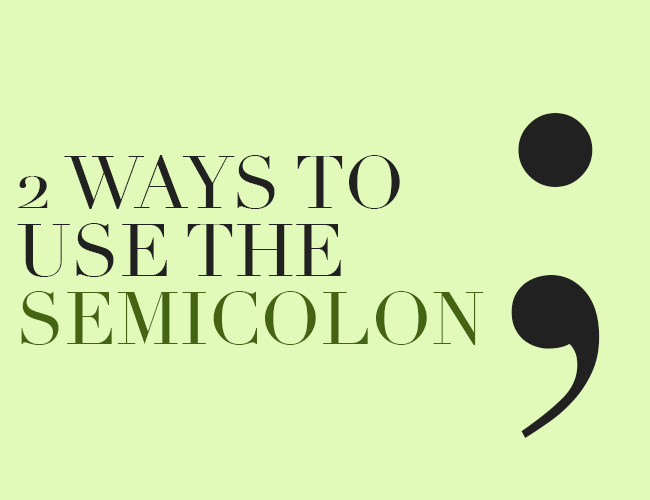 Semicolon Definition: What Is a ; (Also Known as the Super Comma)

Semicolon. A punctuation mark that is stronger than a comma, used either to separate two independent clauses or to separate items in a list when there are parenthetical commas present.

The semicolon is sometimes called a super comma, and rightly so, because it can act as a kind of upgrade when just one comma isn’t enough or is confusing. 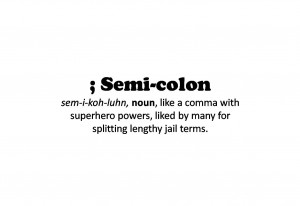 Why Most People Don’t Know When to Use a Semicolon (;)

If the semicolon were just a little less top-heavy, then it would be a comma, and rightfully used and appreciated.

Sadly, many writers have a confusing relationship with the semicolon, not really sure how or when to use them in their lovely sentences.

Some have rejected it outright, including Kurt Vonnegut, who said that the only reason to use a semicolon would be “to show you’ve been to college.”

Don’t worry, little semicolon. Your virtues will not be lost on this audience as long as I have a say in it.

Not sure you’ll ever figure out how to use a semicolon correctly? That’s cool! Consider using a grammar checking tool like ProWritingAid to tell you when you should and shouldn’t use semicolons. Check out our review of ProWritingAid here to see how it works.

The 2 Times You Can Use Semicolons Correctly

In all seriousness, the semicolon is probably the most misunderstood button on a keyboard (except for maybe whatever the heck the little hat over the 6 is). When it’s used properly, however, the semicolon can add beauty and sophistication to your writing.

There are two reasons you’ll need to use a semicolon. Let’s look at them both.

1. Use a semicolon to connect two independent clauses.

You know what an independent clause is, right? You’re a writer!

Sometimes, however, it’s easy to get caught up in the excitement of the semicolon, and you’ll want to use it everywhere. Don’t.

If you’re going to use it, make sure that each clause can stand on its own as a fully formed sentence. If it helps, mentally separate the two clauses with a period to test their independence.

Martin squinted as he read over his news brief. He was in need of a good pair of glasses.

The semicolon in this sentence connects the two independent thoughts without bringing the narrative to a full stop in the way that a period would. A comma is completely inappropriate here because that would lead to a comma splice, and as we have previously discussed, comma splices are evil.

2. Use a semicolon in a list to separate objects that also have commas.

Semicolons can also be used as a kind of super comma, and should always be used in a list when separating objects that also have commas. Take the following sentence:

Diana included Athens, Greece; Paris, France; and Vienna, Austria, on her list of honeymoon cities that were not to be confused with their American counterparts in Ohio, Texas, or Virginia.

If Diana had included Athens, Greece, Paris, France, Vienna, and Austria on her list, her travel plans would be way more confusing. Using semicolons indicates that we can think of “Athens, Greece” as a single unit, even though there are more commas to come and more items in this list.

In order to use semicolons properly when you’re not making lists, it’s important to remember a few things.

1. Each clause of the sentence needs to be an independent clause.

Let’s look back at Martin and his lack of corrective eyewear.

We need a semicolon here because the first half and the second half of the sentence can both stand on their own. Independent of each other, they’re both complete sentences in their own right.

What if we said this instead?

Martin squinted as he read over his news brief, wishing he had glasses.

“Wishing he had glasses” isn’t an independent clause. It can’t stand on its own without the first part of the sentence in front of it.

But if you do have two independent clauses (which you know, because you can split them apart into two separate, complete sentences), use a semicolon with confidence!

Okay, so this isn’t exactly about being right. You can use a dozen semicolons on a single page of writing, and if they’re all separating independent clauses or adding clarity to your comma-filled lists, they can all be correct.

But Kurt Vonnegut was on to something when he warned against the dangers of too many semicolons. I don’t think you should cut them all out! But do use them with care.

Use the semicolon to connect ideas that are related, but don’t try to connect every single idea in a paragraph. Periods are your friends (at least in this context).

Ellie subtly flared her nostrils; the smell of lilac and lavender filled the air; it reminded her of her summers in the hills of Ohio; she and her cousins would make crowns of daisies and give them to their mothers.

For the love of God and the sanity of your readers, do not do this.

Ellie subtly flared her nostrils. The smell of lilac and lavender filled the air; it reminded her of her summers in the hills of Ohio. She and her cousins would make crowns of daisies and give them to their mothers.

Put the Semicolon to Use With a Creative Writing Exercise

Don’t be afraid to experiment with semicolons. Sure, you might place a few incorrectly before you get the hang of it, but soon you’ll be able to use them with ease. It takes some practice, but you’ll start noticing places in your writing where a semicolon would add a welcome breath to the prose.

Do you like to use a well-placed semicolon, or do you agree with Vonnegut that they’re unnecessary and pretentious? Let us know in the comments.

Need more grammar help? My favorite tool that helps find grammar problems and even generates reports to help improve my writing is ProWritingAid. It works with Word, Scrivener, Google Docs, and web browsers. Be sure to use my coupon code to get 25 percent off: WritePractice25

Practice writing with semicolons. Use the following creative writing prompt, using as many semicolons as you can; you can even create a couple lists if you have to.

Prompt: Billy is going backpacking through Asia and needs to get vaccination shots.

Spend at least fifteen minutes on this. When you’re done, share your practice in the comments, and be sure to leave feedback for your fellow writers!

The post Semicolon: The 2 Ways to Use a ; appeared first on The Write Practice.