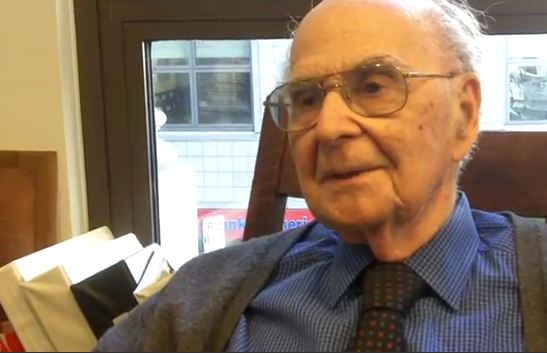 I just wanted to acknowledge the passing of a friend and one of the true greats in the PR/marketing/advertising industry.

Harold Burson died this week at the age of 98.

Mr. Burson, who was described by PRWeek as the 20th century’s “most influential PR figure,” founded the powerhouse public relations firm Burson-Marsteller with Bill Marsteller in 1953. The firm created the concept of total communication strategies that became the industry standard for decades.

Mr. Burson became a friend when he helped guide me on my first book Return On Influence

He was nearly 90 when we chatted in his Manhattan office and even then he was still coming to work every day. Mr. Burson was a journalist by trade and as an officer in the U.S. Army, he covered the Nuremberg Trial in 1945. He showed me priceless mementos from that assignment, which he had on display in his office.

I was amazed at his boundless energy. When I met with him he told me that he was writing a book, which became The Business of Persuasion

, published in 2017. In 2018, I documented one of my conversations with him as he described his strategy for crisis management.

He told me that he really had no great regrets in his very long life and attributed his success to knowing when to say “yes” when a door of opportunity opened up to him.

Mr. Burson pioneered many of the PR best practices we take for granted today, but beyond that, he helped define the role of the corporation in society today, mentored many of today’s brightest leaders, and was a relentless advocate for strong ethical standards.

I will miss him.

Mark Schaefer is the chief blogger for this site, executive director of Schaefer Marketing Solutions, and the author of several best-selling digital marketing books. He is an acclaimed keynote speaker, college educator, and business consultant.  The Marketing Companion podcast is among the top business podcasts in the world.  Contact Mark to have him speak to your company event or conference soon.

The post The passing of a legend appeared first on Schaefer Marketing Solutions: We Help Businesses {grow}.