Drop a site below if you’ve recognized anything cool for bloggers!

If anxiety, boredom, overwhelm, or (ahem) listlessness have paralyzed your creative work, here’s a quick writing exercise to get you going again: 1. Make a list. 2. Repeat. 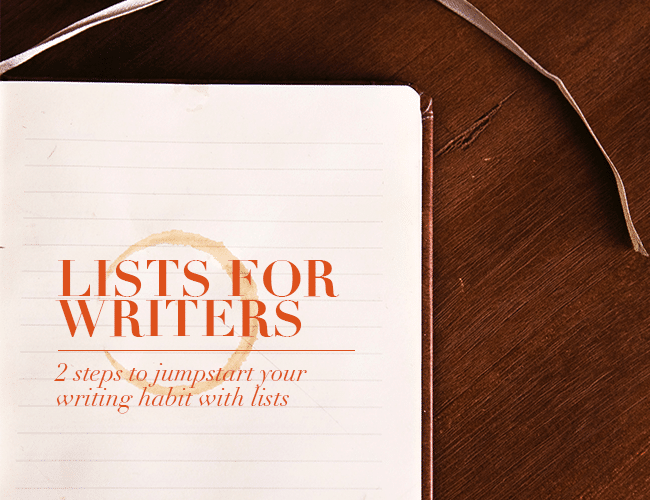 Lists for Writers in Life and in Fiction

This week I’ve been revising a character in a work-in-progress. She makes lists to deal with uncertainty in her life to give her a feeling of control. (Is she based on me? No. What makes you say that? *closes desk drawer holding a sheaf of lists*)

Some of the lists my character makes echo the daily mundane lists we all make:

In a normal week, that list is completely attainable. Some of her other lists, though, border on the absurd:

Now this second list isn’t unreachable, but as goals she’d like to finish in the six weeks before her husband returns from a long trip, complicated by the fact that she doesn’t have a working oven or the budget for travel or a remodel? Yeah, the list is absurd for the timeline and situation.

She organizes her thoughts about a murder suspect in a list. She prioritizes escape routes in an albeit rushed list. Her lists are a quirk of her character and they’ve been fun to write, even if I’ll delete most of them by the end.

But there are other ways to jumpstart your writing habit using lists for writers.

As I revised, I remembered a section in Austin Kleon’s book Keep Going about how lists help make sense of a chaotic universe (highly recommend this book, especially right now). He mentions lists such as: to do, to draw, to learn, not to do, and thank you lists. These are all great starting points and can get you writing on a day you are stuck.

I wonder if we are drawn to list-making because it is a quick way to make sense of our day and world. Most people won’t journal, but nearly everyone I know makes lists. As I revised my character’s lists, I began pulling out the ones that didn’t advance the plot or reveal character. I put the discarded lists in a cut file and immediately began thinking about what our lists reveal about us.

My grocery list reveals our food preferences and the reality of feeding four teenagers. My chore list shows what matters to me most in keeping our home clean(ish). If I collected all the lists I make daily, weekly, monthly into one book, it might be a boring book, but it would certainly show where I’ve been and what I cared about.

In The Writing Life, Annie Dillard writes, “How we spend our days is, of course, how we spend our lives. What we do with this hour, and that one, is what we are doing. A schedule defends from chaos and whim.” She’s referring specifically to a schedule, but isn’t a schedule just another type of list?

As a writing exercise, a list can be a quick, concise collection of sorts, one that forces you into rapid fire ideas. A title provides the prompt and you can fire off as many ideas as you like. Is this too simple for a writing prompt?

Maybe. But consider: we are surrounded by content organized this way: top 10 books or songs, top 30 entrepreneurs under 30, top five murder suspects in books or film. Open any site and peruse its articles and you will likely find a list.

What creative lists could you make?

Just like most old ideas, it merely takes your specific viewpoint and creativity to make a list into something fresh and delightful.

And what better way to end this article than with a list of lists for writers?

If you find yourself stuck, unsure what to write, I’ll point you back to the exercise we began with: 1. Make a list. 2. Repeat.

Do you like lists? When have you seen lists used creatively in fiction, TV, or film (I’m thinking of the movie How to Lose a Guy in 10 Days)? Share your ideas for creative lists or list prompts in the comments and play along!

If your brain is circling with things that you need to get done, write a quick list with those items and put it away for now. Our goal with this first list is to clear space.

Now, here’s a list for writers: two creative list-making prompts. Pick one and make a list of your own:

Choose a title to organize your list. Be brief and specific.

Take fifteen minutes to make your list. Share your practice in the comments, and be sure to leave feedback for your fellow writers! Can you add items to their lists, too?

The post Lists for Writers: 2 Steps to Jumpstart Your Writing Habit With Lists appeared first on The Write Practice.